Political Brands: Can Parties Be Distinguished by their Online Brand Personality?

This paper was in response to a call for greater exploratory research into brand personality in politics and a collaboration with Fiona Lettice and Chris Hanretty. The paper uses Aaker’s model of brand personality along with multiple correspondence analysis (MCA) to plot the relative personalities of five UK political parties.

Introduction – The UK political structure has expanded from what was once a two-horse race into a complex multi-party system. This is evidenced by the election of a coalition government in 2010 and the seven-party representation in recent pre-election debates. There have been, however, some suggestions that the electorate have little choice due to the homogeneous nature of a number of the parties. This raises the question of whether there is sufficient differentiation between parties and their policies, leading to increased attention paid towards the ‘brand images’ of the main five parties: Conservative, Labour, Liberal Democrat, the Green Party and the United Kingdom Independence Party (UKIP). 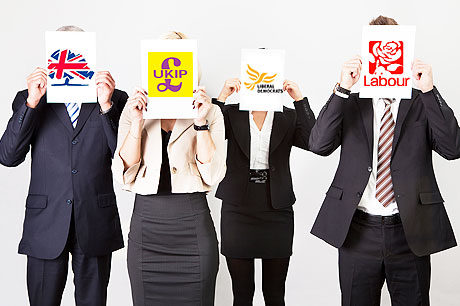 Online presence – Parties represent themselves through a variety of media, including television and radio, advertising hoardings, newspapers and personal appearances, such as hustings; all of these contribute to the overall impression that is formed. However, when people are looking for a summary of a party’s position on a particular issue, they are likely to turn to the internet, reading both online articles and the contents of the parties’ websites. It is from the five main party websites that this research was able to glean a large amount of analysable data, which could be used to analyse the brand personality each appeared to present.

Spatial politics: Brand characteristics – Although branding usually refers to a commercial product, the same principles have been applied to the presentation of political parties. The research utilised Aaker’s model of brand personality and five dimensions were analysed: competence, excitement, ruggedness, sincerity and sophistication. Using a system of categorising words and phrases that relate to these dimensions, known as Linguistic Inquiry and Word Count, it was then possible to perform a statistical analysis of the frequency of key words and, consequently, determine the dominant characteristics of each party. The findings showed that: competence and sincerity were considered primary dimensions, and sophistication, ruggedness and excitement took a secondary role. 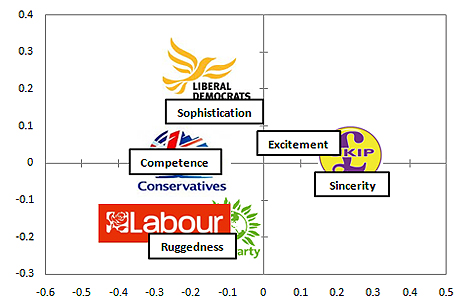 The brand ‘personalities’ of the parties – Using the method described, a clear picture emerged of the characteristics demonstrated through the online presentations of each party, as well as how strongly each characteristic was represented.

In summary, the study showed that the online brand personalities of four of the five main parties are clearly differentiated, with just the Green Party failing to achieve a unique position. With the results of the 2015 general election now a matter of record, it is entirely possible that those responsible for projecting the images of the parties will turn more heavily towards commercial branding practices.